A new report has shown that over the past 10 years, manufacturing in the United States has started to become more competitive compared to many low-cost rivals- the most notable one being China. Today, U.S. factories are able to produce goods at cheaper prices than many of those produced in Eastern Europe. According to the Boston Consulting Group (BCG), it is now less than 5% cheaper to produce goods in China compared to the United States, which is quite good considering that the U.S. wasn’t even on the map prior to this.
END_OF_DOCUMENT_TOKEN_TO_BE_REPLACED

The American Shop Floor – An Infographic 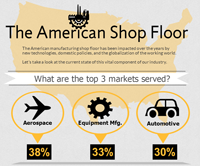 With new technologies, rules, and regulations being tossed into the mix each day, the typical manufacturing shop floors of America have been constantly evolving over the years to reach their current state.

But how exactly do we describe the current state of these shops? Who are they serving the most, and what machines are now being used? What types of metals do they machine with most often, and how do they handle quality control?
END_OF_DOCUMENT_TOKEN_TO_BE_REPLACED